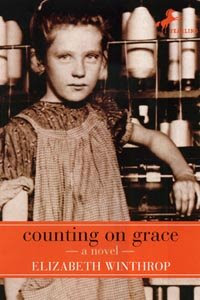 Elizabeth Winthrop is the author of more than 50 works of fiction for young people. Counting On Grace, her recent historical fiction middle reader, has garnered much priase. It is an ALA Notable Book , a Jane Addams Peace Prize Honor Book, and a Junior Library Guild Selection.

1. I'm not sure if we choose our stories or if they choose us. What was the case with Counting on Grace?
Grace chose me. Absolutely. I was at an exhibit of Lewis Hine child labor photographs in the Bennington Museum in Bennington, Vermont and I saw this little girl leaning on a huge spinning frame in a mill. She's beautiful, but her eyes are wide and wary. She'd seen more of life than she should have at the age of 10. She was staring directly at me and she might as well have spoken out loud so clear was her voice in my ear. She said tell my story.

2. What were the challenges in bringing this story to printed page?
A spinning frame is an incredibly complicated machine to try to explain to someone, child or adult, who's never seen one. That was a major challenge. First I had to understand how it worked and then I had to translate that to a modern day reader. I also searched a long time for the right voice. I wanted Grace to come alive for kids today and I finally found the way to do that by telling the story in a first person, present tense voice. I've been told that the voice is what makes the book so immediate for readers. That's what I was hoping for.

3. You truly bring millwork to life in this story. How do you feel kids relate to Grace and Arthur today?
I think the kids in America know that if they had been born 100 years ago, they could have been Grace and Arthur. 12 hours a day, 6 days a week they would have been working a spinning frame or harvesting beets or shucking oysters. Sometimes when school feels like a tough place to be, the idea of working is tempting. You're not sitting at a desk all day. Adults don't seem to pay much attention to you if you just get your work done and bring home some money to help the family survive. But I hope the drudgery and exhaustion and despair of these kids in their trapped lives come through to readers. Grace and Arthur squabble and make up, break rules, keep secrets, take chances -- just the way kids do now. It's just that the stakes are higher, the consequences more devastating.
4. Your other novels, Castle in the Attic and Battle for the Castle are such wonderful works of fantasy, how did you enjoy delving into the world of historical fiction?
This is actually my third work of historical fiction. My first, IN MY MOTHER'S HOUSE (William Morrow), is an adult novel that opens in the great New York blizzard of 1888 and runs through to the 1970's. The second, DEAR MR. PRESIDENT, Letters From a Milltown Girl (Winslow Press) is set in North Adams, Massachusetts during the Great Depression. That is the book that first got me interested in mills in the Northeast. I love the way research for historical fiction can nudge the book in a different direction or can illuminate a character. But I have to be careful not to get lost in the research, to keep my eye on my story, on where my character is going and how I can get her there.

5. What can your fans look forward to next?
Another work driven by history but this time it's closer to home. I'm going to tell the story of my mother who grew up in Gibraltar, was evacuated in 1940 up the English Channel right through the Dunkirk rescue of the British Expeditionary Force and who ended up working as a spy in London during World War II. I'm not sure what form the book will take but right now I'm up to my eyeballs in research and loving it.
Posted by NanC at 9:25 AM 4 comments:

I've added two books to my To Read stack on my desk; Linda Sue Park's latest release Keeping Score. I am really looking forward to reading this one. I've known Linda Sue since before her first book was released. This one tells the story of a young girl named Maggie, baseball, and her friend serving in the army in Korea. Perhaps I'll be able to get Linda Sue here for an interview.

The other book is also by a wonderful writer I've had the great pleasure to meet - Elizabeth Winthrop. The book is titled Counting on Grace. It's about 12 year-old Grace and her best friend Arthur, who have to leave school to work in the mills. Photographer and reformer Lewis Hine comes to the mill to photograph kids next to the enormous spinning frames. Elizabeth - up for an interview?

Can't wait to read both of these. What's on your shelf?
Posted by NanC at 5:16 AM No comments:

Flemish author, Anne Provoost’s In The Shadow of the Ark, grips the reader with vivid scenes, well-developed characters, and beautiful language. She tells the story of Noah and his ark through the eyes of a young woman named Re Jana. Re Jana’s family have fled the marshes where they lived for years among skilled shipbuilders and fishermen to find work in the desert among the Rrattika people who are “wanderers”. Re Jana’s father, a shipbuilder, finds work with Noah, a wanderer, who is constructing a massive ship, the ark. Re Jana offers her skills to find “good water” and ultimately wins the love of Ham, the Builder’s son. Unfortunately, Ham has selected another girl to be his wife, but he cannot give up Re Jana. When Re Jana learns from Ham the true purpose of the ark she not only fears for her life and that of her family, but also questions this god that Ham and his family are obeying.
The apocalyptic scenes that ensue are gripping and present very powerful emotions as Re Jana and the reader are confronted with the philosophical questions of who lives and who dies in this biblical tale.
Readers who enjoyed The Red Tent, by Anita Diamant, will surely want to pick up this book. In a bold departure, Scholastic has decided to sell the paperback rights of this book to an adult publisher, Berkley Books. Look for it now in bookstores. The book is intended for mature young adult readers and therefore, crosses well into the adult arena. Provoost does imply some sexually implicit scenes, one of which involves an intimate relationship between two women. None of these, however, are very direct or crude.
In the Shadow of the Ark is an excellent choice for book club discussions. (review first published in Historical Novel Society REVIEW)

Song of the Magdalene by Donna Jo Napoli
Salome by Beatrice Gormley
Sarah by Marek Halter
Posted by NanC at 7:11 AM No comments: