Children of the Past -- An Interview with Lois Huey

Who can imagine what life must have been like for a kid living twenty thousand years ago? Lois Huey can! Travel back in time with author and archeologist, Lois Miner Huey, with her latest book, Children of the Past:Archeology and the Lives of Kids. Thanks, Lois, for talking with us today about this fascinating book. 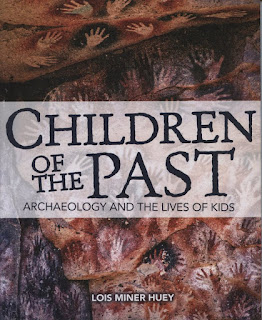 What inspired you to write about kids who lived thousands of years ago?


Based on archaeological evidence, I was wondering what it was really like to be a kid years ago. My latest book Children of the Past Archaeology and the Lives of Kids (Lerner 2017) begins thousands of years ago with cave kids and goes through time to the 1790s. Finding evidence of children from various times in soil layers is exciting for archaeologists. I wanted to share that excitement and what that evidence of their lives meant in different time periods. In previous books like Forgotten Bones Uncovering a Slave Cemetery and Ick! Yuck! Eew! Our Gross American History, I've included kids in the information based on both archaeology and documents but not to the extent I wanted to do. So now I have.

Writing about the distant past must have its challenges. There aren’t diaries or other first-hand accounts to study. How did you research this subject?

Archaeologists, like children's writers, are very willing to share their research and reports. I contacted those I knew who were especially interested in this topic, and received lots of information, scientific reports, and ideas from them. I then studied their bibliographies and continued on from there.


As an archeologist, you have such a unique perspective. Did you draw upon your own work in the field for this title?


One of my favorite archaeological projects was an excavation at Schuyler Mansion State Historic Site in Albany, New York. The mansion in the 19th century became an orphanage. The upper layers of soil contained numerous doll parts, clay marbles, a jack, and even parts of toy tea sets. The doll parts clustered in one area of the site, the glass marbles in another, indicating girls and boys played in separate areas. The biggest surprise to me, though, was the fact orphanage kids had toys at all. Research in the Roman Catholic Church archives revealed how many such items were provided to the kids by parishioners as part of teaching them how to care for babies, sew outfits for them, and play fairly. I wanted to include this story in the book, but the editor persuaded me to stop at the end of the 18th century. I agreed with her.

How might a teacher use this book in their classroom?

Children of the Past covers so many time periods that teachers from the fourth grades on through the seventh grade would find it useful. Cave kids, hunters and gatherer children, the first farmers, early colonists in America, and a largely unknown southern Underground Railroad are included--something for each of many periods of history. The chapters begin with a narrative story based on the archaeological (and documentary) evidence, then goes into expository explanations of the science involved in archaeological work that yields the evidence used.


Do you have any tips for young aspiring writers?

I always was one of those who wrote stories in school and at the picnic table in the back yard for friends to read. I encourage any kid who has that inclination to continue. It's a rewarding way to get down your thoughts, the scenes in your head, information you discover--and it's fun. Writing leads to good grades in school, becoming a journalist, librarian, teacher, and even an archaeologist!

Thank you, Lois! This has been fun. We look forward to see what subjects you will focus on in your upcoming books.
Posted by NanC at 12:00 AM No comments: