Many books have been written in the 10 years since Hurricane Katrina made landfall - both fiction and factual.

These deserve a read:

In this recent release, Don Brown describes the events that took place through gritty, somber watercolor illustrations and bits of dialogue. This is Brown's third successful nonfiction graphic novel. In the short time since its release it has already garnered much acclaim.

Beneath a Meth Moon by Jacqueline Woodson
Fifteen-year-old Laurel is living a post-Katrina nightmare. Her mother and grandmother both perished in the storm and she has since moved to Galilee, Mississippi. Woodson weaves a poetic tale of grief, addiction, and survival as Laurel struggles to start a new life. 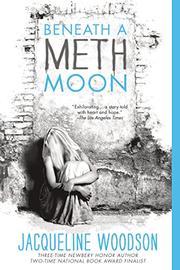 Two Bobbies: A True Story of Hurricane Katrina, Friendship, and Survival by Kirby Larson & Mary Nether
This nonfiction picture book tells the tale of Bobbi, a dog who was left chained on the porch with bowls of food and water and Bob Cat, who stayed with Bobbi even after Bobbi broke free of his chain. The two became an unlikely pair of Katrina survivors. Shelter volunteers rescued the pair four months later to find that Bob Cat was blind and Bobbi was his seeing-eye dog. They lived together after Katrina on a ranch in Oregon.

Thankfully, after Katrina important laws were passed to allow for the care of pets during disasters. 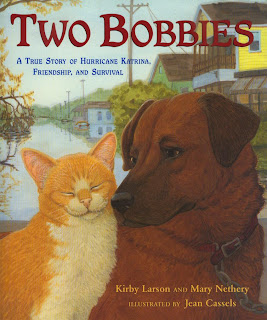 The Family Romanov by Candace Fleming

I had the wonderful opportunity to listen to award winning author Candace Fleming speak out writing her latest - The Family Romanov - last week at the Society of Children's Book Writers and Illustrators conference in Los Angeles.

If you haven't read this one yet, by all means READ IT! I have been fascinated by Russian history and the Romanovs for years, but this book brought me to places I hadn't explored. In her acceptance speech for her Golden Kite, Candace discussed how this was originally a book about Anastasia, but her research led her away from the young, naive girl to Anastasia's parents and their leadership. Research can pull you in different directions, as we writers of veritable books (nonfiction) know.  Candace mentioned in her workshop that her research on Faberge eggs never even entered the book.

What readers will find in The Family Romanov is a rich story of intrigue, notorious characters, drama, and tragedy. Teens will gobble up the dramatic narrative. History teachers will want it for their classrooms.