An Interview With Deadly's Julie Chibbaro

A mysterious outbreak of typhoid fever is sweeping New York.
Could the city’s future rest with its most unlikely scientist?
Julie Chibbaro is the author of two YA historical fiction titles, Redemption and now, Deadly.  In both, she brings to life rich characters in well developed historical settings.
Julie speaks about her latest book, Deadly, in this interview.
1.   I'm not sure if we choose our stories or if they choose us. What was the case with Deadly?
Writing is all about making choices, which isn’t always easy.  Kind of like shopping in a store that has a hundred different kinds of everything, and they all look good.  Which one do you pick?  Sometimes, you just have to try each one out, see what works best.
2. What were the challenges in bringing this story to printed page?
The answer to that goes back to question one.  I started writing Deadly in 2004, only it was called Fever then, and was told by a boy, and intertwined with the story of the Triangle Shirtwaist Factory fire.  That was too complicated, so I let go of the fire, and the boy.  I threw away about 400 pages and started from scratch.  I found Prudence, my main character in Deadly, only it wasn’t called that, but, um, it had about five working titles.  That first draft was told in the form of letters to her best friend.  The letters didn’t quite reach the depths of the story, so the next draft became a diary, and we added the illustrations.  Each decision took me closer to the real story, but there were a number of drafts before this final story took shape.
3. It is difficult to imagine a world without the healthcare we experience and yet there are still so many places in our world where epidemics are commonplace.  How do you feel kids will relate to Prudence and her world today?
In many ways.  Prudence is an outsider at her School for Girls, and I know lots of kids feel that way.  She wants to transcend the limits of her knowledge – to learn how to stop things like epidemics and diseases from taking the people she loves, as well as those in her community.  We’ve all had the flu, we hear of epidemics daily, from H1N1 to HIV-AIDS, and we still don’t know how to fight these things.  What’s the cure for a virus?  None.  Antibiotics only work against bacterial infections.  I almost feel we’re as limited today as they were then!
Prudence knows that she wants to “fight death,” as she puts it, but she doesn’t know how.  She can only gain knowledge, and try to understand the human body.  She begins to realize that knowledge is power.  In a teen girl’s hands, I think that’s the greatest tool.  Some girls today seem to know that, and watch out for them (girl power, yes!)
4. Susan Campbell Bartoletti speaks of research as “an extreme sport”.  Tell us about the research you conducted for Deadly. Any “extreme” stories?
I feel utterly fascinated by what the world was like before I got here.  I realize that I’m an obsessive person, meaning I don’t stop doing research until I feel I understand a time period, which basically means I never stop.  Curiosity is my driving force.  Research is like a workout, training for a marathon, which will be the writing of the novel.
To learn about the world of Deadly, NYC in 1906, I walked the streets of the Lower East Side, where my story takes place, and took the tour of the tenement building that was preserved from that time.  I read books, immersed myself in photos, watched the little films Thomas Edison made – there is a terrible, amazing one where he experiments with electricity on an elephant, and an especially beautiful one, a ride on the trolley to Coney Island.  I sat in the New York Public Library and read from the dozen or so newspapers of the time, listened to the music of vaudeville – Tin Pan Alley tunes, the strange lyrics, there was so much to know!
As I worked, questions would come up – Prudence is a notetaker for Mr. Soper, so, did they write with pens or pencils, were ballpoints even invented yet, what did typewriters look like?  Other questions arose:  how many people had a telephone, who used a car and who used horses, how many people had electricity, how did they get fuel for their stoves, what would Prudence wear to school and was it different from what she wore to work?  Did teenage girls marry young?  What was the class system?  How did so many millions of immigrants manage to live together in such a small space?  And, well, you get the idea.  Constant, incessant questioning from my inner nag, who insisted, “Get it right!”
5.  What’s next for your fans?
I just finished a book tentatively titled Aurora Borealis & Amazing about a boy artist who does graffiti, though he wouldn’t call it that, and a girl artist who’s a poet, though she wouldn’t call herself that.  Because of troubles at home, they mostly live in the parks of NYC.  There, they meet, and change one another’s lives.  This book speaks to the struggle of young artists – how do you know you’re any good?  What does being an artist mean?  I’m also doing research for a novel about a female serial killer, but it’s just a baby at the moment.
Posted by NanC at 5:36 AM No comments:

I have always focused on historical fiction in this blog, but I couldn't pass up recommending two great nonfiction books I recently read. The first is award-winning author Jim Murphy's latest - TRUCE. In TRUCE, published by Scholastic, Murphy deftly tells the story of the Christmas Truce that miraculously occurred during World War I. It is extraordinary to hear the tale of how soldiers were able to put aside their weapons during horrific circumstances to share puddings and beer and, more importantly, goodwill!

The other book, THE GREAT AND ONLY BARNUM, was a YALSA-ALA Excellence in Young Adult Nonfiction finalist.  Candace Fleming brings the legendary showman to life through her text, old circus posters, photographs, ticket stubs, and etchings.  If you've ever enjoyed the big top, this is a must read! 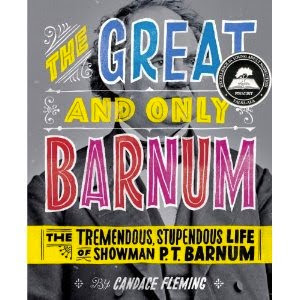