Interview with YA Author Eric Luper 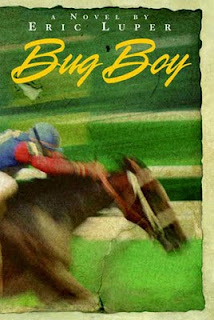 Eric Luper is the author of Big Slick and now Bug Boy. Both YA novels, Eric writes about teens facing difficult decisions in interesting circumstances. Big Slick focuses on the world of poker. Bug Boy boldly and realistically brings readers to horse racing in the 1930s. Eric talks about his first historical fiction novel in this interview.


I'm not sure if we choose our stories or if they choose us. What was the case with Bug Boy?

I remember going to the racetrack as a child in New Jersey. My impressions included things like concrete, chain-link fences, cigars and ratty tweed blazer-wearing gamblers. When I went to Saratoga Race Course as an adult, I was amazed that something I associated with such ugly things could be so beautiful. Saratoga is about history and culture, it’s green and lush; it’s almost like the racing comes second. Almost. And the more I read about Saratoga, the more I fell in love with it.

What were the challenges in bringing this story to printed page?


Writing this book was tough. Not only did I have to learn all about Thoroughbred horse racing, but I had to learn all about Saratoga Springs during the Depression. And both were going through big changes around this time. Every page in this novel brought its challenges. Fortunately, the National Museum of Racing and Hall of Fame is in Saratoga along with the Saratoga Historical Society. Likewise, the archives at the Saratoga Springs Library are remarkably well-kept. Everyone seemed excited about the novel and really bent over backward to help me out.

You truly bring 1930s Saratoga to life in this story. How do you feel kids relate to Jack and Elizabeth today?


Although the times are different, human nature is not. One of the things I wanted to explore in BUG BOY is how when our grandparents or great grandparents were teens, they weren’t much different than teens today. They engaged in risky behavior, they rebelled against their parents and they listened to music that older people scoffed at. I wanted to make the point to young readers that even though grandma might look down her nose at him or her for sneaking out late at night, she was doing the same thing when she was that age.

Your other novel, Big Slick, is such a great contemporary YA novel --  how did you enjoy delving into the world of historical fiction?


For me, historical fiction is hard. I am not a researcher by nature and I am terribly disorganized. I did a lot of reading but not a lot of note-taking or page-marking so when I wanted to include a detail, I often found myself frantically backtracking for facts. Knowing which details are important and which ones are unnecessary was tough as well. Since I’m new to Thoroughbred racing and to 1934 Saratoga, I included the facts that absolutely fascinated me, assuming they would absolutely fascinate others… but when in doubt I left it out!

What can your fans look forward to next?

For my next book, I return to contemporary YA fiction. The novel is called SETH BAUMGARTNER’S LOVE MANIFESTO and will release in June 2010 with Balzer + Bray, the new imprint at HarperCollins. The book is best described as a dark romantic comedy and is about a teen who unexpectedly gets dumped by his girlfriend and catches his father with a woman who is not his mother both in the same day. He goes into a tailspin and spends his summer trying to figure out what love is all about. It’s a fun book that touches on important issues, and it’s got a great cover that I’m not at liberty to share. Not yet anyway!

Great to see an author like Eric Luper writing Historical Fiction.
How do you see the market for historical fiction currently? Are there any agents or editors interested anymore?
Mary

I apologize for the delay in my answer, Mary. I was just alerted to your question.

What I discovered is research = hard!

Of course there are agents and editors interested in historical fiction, otherwise my book would never have been published. Neither would Chains or Octavian Nothing.

It's my opinion that editors and agents are looking for good writing and a story that resonates with them, rather than for a specific genre. Write a story that speaks to you and have confidence that it with resonate with an agent or editor and that it will resonate with everyone else up the chain, management, marketing, booksellers, reviewers and ultimately (and most importantly) readers.

Good luck with your work!

we love Eric! Thanks for stopping by - I love finding great blogs!